Good Morning All,
Another gorgeous sunny morning. I don't know if it's very warm, as I haven't stepped outside yet﻿. I hope to venture out into the garden today and try and cut down the dead bits of my plants, that should have been cut down at the end of the autumn.
My good friend Sue helped me do my first craft market yesterday. I wouldn't have been able to do it without her. This is just a quick post so will report on that more on my next post.
This card is for my friend's daughter's first baby. I did her and her bridesmaids hair, for her wedding 3 years ago. Her brother has 2 boys, so her mum was thrilled to get her first Grand-daughter.
The pictures are in the wrong order. However, the stamp I used is from Lili Of The Valley and the sentiment stamp comes with it too.
I added a little rocking horse charm to the bow, which I found in my bits box. The flowers are from my stash. I think they came from Hobby Craft. 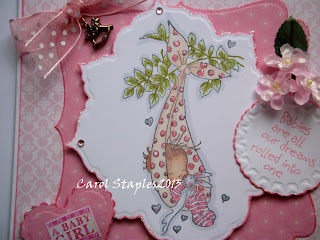 The image I coloured with Distress Inks and also on the edges of the papers. The backing papers are from Dovecrart Back to Basics paper stack. 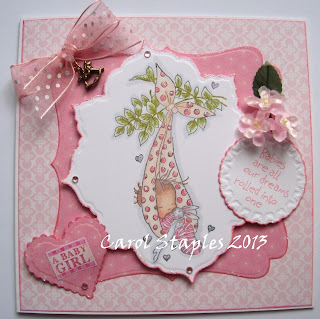 That's all for today. After my market yesterday, my knee is not very happy sitting at my desk for long. I think it's time for an ice pack on it!
Thanks for visiting my blog. I love to read all your lovely comments. Enjoy the sunshine today.
Hugs,
Carol S.xx
Posted by Carol S. at 11:32 6 comments:

Email ThisBlogThis!Share to TwitterShare to FacebookShare to Pinterest
Labels: Lili Of The Valley

My Cards On Create & Craft!

Hi Everyone,
I hope you are all enjoying this lovely warm sunshine﻿ that we are having here in West Sussex. I went down to the bottom of my garden today, to an area I made into a wild garden. It,s very pretty at this time of the year with loads of spring flowers, Grape Hyacinths, Hyacinths, Primroses, Daffodils, Polyanthus, to name but a few and the Bluebells' buds were just showing. I sat on my pretty cream metal bench in the sun and it was just lovely. I can't believe that only a couple of weeks ago we were freezing!!
Early in January, Stamp Addicts put out a DT call in their newsletter. I have over the years bought quite a lot of their stamps, so I thought I would give it a go. I didn't hear anything until a couple of weeks before I went into hospital for my op. I had an email apologising for the delay but they had hundreds of replies to go through. Also, that I was in the last 12.
Just before I went into hospital, I had another couple of emails that came through together. One said I was in the last 4 and the other saying that I had not been successful this time. The odd thing was, they had more or less the same sent time!
A couple of weeks ago I received a set of Owl stamps and a Victorian street stamp through the post. Very strange I thought because I had not ordered them. The only paperwork with them was 2 flyers advertising Stamp Addicts!
I phoned them the following day and to cut a long story short, before you all fall asleep, they had sent the last 2 emails in error and they wanted all the final 12, to make sample cards so they could then decide who they wanted. They said only use the stamps you were happy with.
So these are the samples I made.
I saw that Stamp Addicts were on C&C yesterday, Monday, doing the Craft Clinic. So I decided to record it.
Guess what? The first card below was the second sample card shown  and the next card was the third card shown!! I had no idea they were going to be on there! 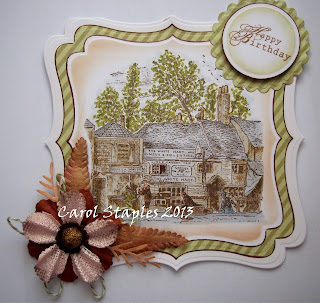 The card above was stamped with Memento and coloured with Copics and Promarkers.
The one below was stamped with Walnut Stain Distress Ink and the colour just dragged out with a damp brush. I then added Peeled Paint on the trees and Weathered Wood on the roofs and the buildings. 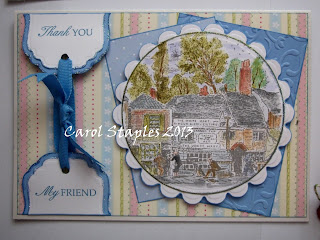 I don't know if either of the owl cards were shown, as I missed the end. 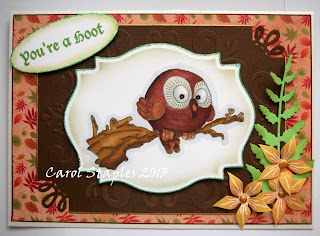 I did put a letter in saying that these stamps were a bit out of my comfort zone, so a bit lost as to how to use them! The flowers on the one below, I made just from a strip of paper, snipped and rolled up tightly and glued. I then just curled over the 'petals' and put a gem in the middle. 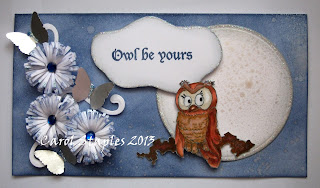 It's a long time since my cards were on C&C. Not since I was on Little Claire's DT. I did have a picture of a table I had painted on there, when Sheena Douglas first bought out paint fusion. I had an email from Ross, Sheena's husband, asking if I could email the pictures and give them written permission to show them on TV. They were shown 2 days running and Sheena telling the story as to why I did paint it!
Well I am yet to find out if I am on the DT or not. So watch this space and I will let you know.
Thanks for stopping by and leaving me your amazing comments.
Hugs,
Carol S.xx

Hi Everybody,
I hope you are all enjoying the sunshine. It makes you feel so much better just to see it.
I must thank all of you for your lovely messages re: my knee op.
I had another Physio session this morning. Sian, the Physio thinks I will be able to drive now. I have an appointment to see the Consultant tomorrow, so I am hoping I will get the all clear.﻿ I had a couple of really good days with the knee last week and then 3 really bad days. I don't know why, except I think I could of done too much massaging to get rid of the fluid around my knee.
I have had this idea for a clock in my head for a while. It was frustrating not being able to sit long enough to do it. In the end I just sat for 20 minutes at a time and gradually over 3 days, managed to get it done. 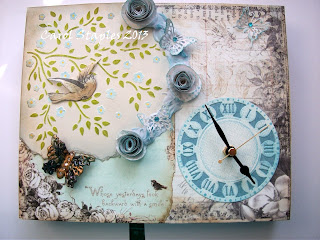 ﻿
The piece of card with the bird on it, started out as a plain white and I coloured it with Broken China Distress Ink and a bit of Walnut stain around the edge. The bird was cut from a piece of my paper stash.

Then using an Imagination Crafts Apple Blossom mask and Paper Artsy Grunge Paste, I bought at The Craft Barn, using a spatula, I applied the paste over the mask and left it to dry.

It didn't take long, so I thought I would try to colour the paste with Copics and it worked. 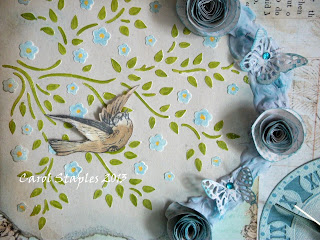 For the flowers, I cut a circle of white paper and coloured it with Broken China DI and then stamped random script and dots, using the same ink over it.  Then starting at the edge I cut around the circle about 1/2 inch wide strip until I reached the centre and left a piece to sit the flower on as a base. Then starting at the narrow edge, I rolled it tightly until I reached the centre. I put a blob of glue on the base I had left and put the rolled flower onto the glue. 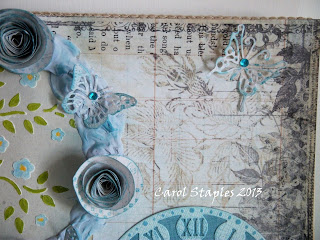 The butterflies are Cheery Lynn Exotic Dies. I added a little gem for the head.

The clock I cut, using Marianne Craftables Clock Dies, from a piece of Coredinations and sanded the detail on the edge. I then inked over the sanded area with Broken China DI. 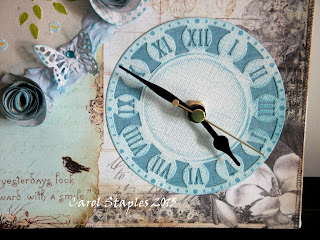 The other papers were free with a magazine. The butterfly in the picture below, I made from Friendly Plastic. I haven't used it for years! I just cut small pieces from mixed colours. Softened it with my heat gun and then did the lace effect and adding the gems on the body whilst it was still soft. 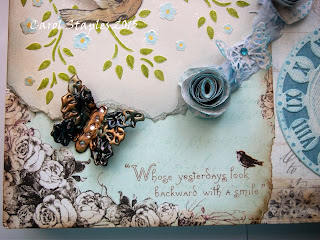 It took me a while to make my clock but I so enjoyed making it. A friend came around to see me yesterday and saw it on my desk. The bits were just sitting on it, none of it even stuck down. She said straight away 'I want it for my bedroom!'
It is supposed to be for my first market at the end of the month. So I think I will have to make another one. I can't make it the same, as I don't have the same papers but I could try to get it similar.
Thank you for stopping by and I will let you know how I get on at the Hospital tomorrow. I just hope I will be able to drive.
Hugs,
Carol S.xx﻿

Hi Everyone,
Firstly I must thank Marianne at Marianne's ﻿Craftroom, for alerting me that I had word verification on my comment page. It has now been removed!
The Craft Barn, where I worked as a Tutor and Demonstrator for a few years, until my leg got too bad, has moved. They were in Lingfield, Surrey, just a 7 minute drive from my house. They are now in a new, huge barn conversion in South Nutfield, Surrey, a 30 minute drive from my house.
It is very strange, because when I moved out of London, 41 years ago, I moved to South Nutfield. I lived in an apartment, in the road that runs parallel with Sandy Lane where The Craft Barn now is! They are on Priory Farm, where I used to go to satisfy my strawberry craving when I was pregnant with my daughter!
If the weather is ok tomorrow, a friend is taking me there.
This is a card I have made for Sandy and Ian, the owners of The Craft Barn. The image is a LOTV stamp and coloured with Distress Inks. 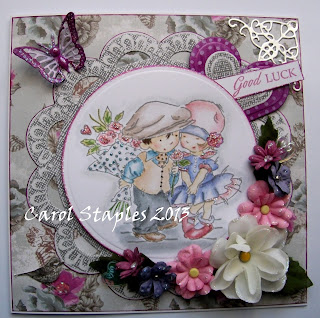 The backing papers are from a pack that was free with the Cardmaking and Papercraft magazine. 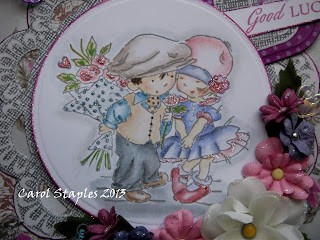 The flowers are mainly some old Prima flowers that I cut up and made different shapes with. The large white one was a rosebud that I took apart and then put my heat gun onto it to open the petals. 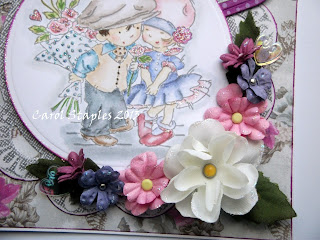 I am really looking forward to seeing the new barn, as the last one was not the easiest to work in!
Thanks for stopping by and for leaving your lovely comments.
Hugs,
Carol S.xx
Posted by Carol S. at 17:35 5 comments: