Another unused stamp!!
A Woodware stamp purchased some time ago!!

I coloured it with my Zig Pens that were given to me
from Sandy, that had The Craft Barn.
So a big thank you Sandy, they are great to colour with. 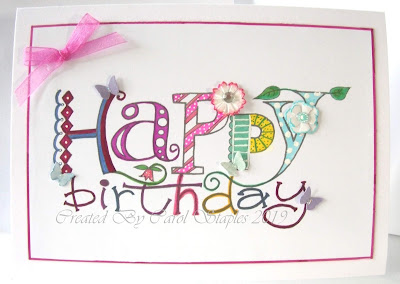 The highlight was meeting up with the two daughters
of a very old friend. Their Mum, Josie and I had a very close
friendship and she sadly passed away 17 years ago, aged 54 years.
I sat with her through her final hours.

Debbie, the eldest one, drove for 3 hours from her home in
Sussex to her sister, Karen in Wiltshire!!
The next day she drove them, for just under 2 hours up to
meet up with me in The Cotswolds!

We had 5 hours of chatting over a long lunch!!
Some tears about losing their Mum and a lot
of laughter about what we got up to in our younger days!!
It was so lovely to see them.

Josie and I had the same sense of humour.
I was driving us one day, from a craft show in Brighton,
home to the village we lived in West Sussex.
We were laughing so much I had to stop in a lay by,
as I couldn't see the road through the laughter tears!!
I have so many happy memories of our times together.

This photo I took in Bourton-on-the-Water in The Cotswolds.
It was a lovely day and we sat on a bench along side this river.

Then we could not believe our eyes. The whole area
was taken over by Chinese groups of Tourists.
I know we were tourists, but there was only 2 of us.
There were hundreds of the Chinese and that is not an exaggeration!!
They just took over the village so we left. 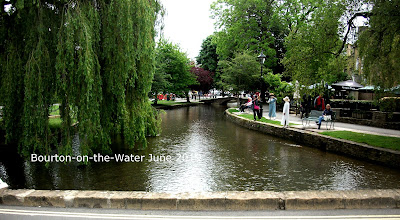 I hope to get back to posting a bit more often.

I have been catching up with your blogs over the last few days.
So thank you for the messages on my last post.
I had scheduled it so it appeared that we were at home!

Hope I haven't bored you with this post.
I will return comments to those that I receive
on my blog.
I do so love reading them and they certainly give me a lift!

Firstly, I must thank you all for the lovely messages you left me
on my last post.
It wasn't an easy thing to do, to step down from WW.
It was a long time on the same team.

I have been busy making cards for the Care Homes.
I just take in 2 whole racks full of new designs and swap them over,
for the ones that are leftovers.

I bought this Stamping Bella stamp called Poppy, at the
Craft Show at Thetford, last February.
This is the first stamping with it!!
I don't usually like faceless images, but I do like their stamps.

I coloured her with Copics.
The background was from a paper pad from Hobbycraft.
I ran it through an embossing folder that was free
with a magazine. I have no idea which one!!

I haven't used embossing folders for ages. I am
determined to use them a bit more. 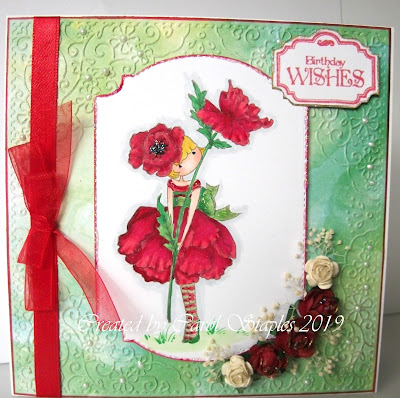 I grounded her with a touch of grass, a few flicks with a pen!
Very technical...not!! 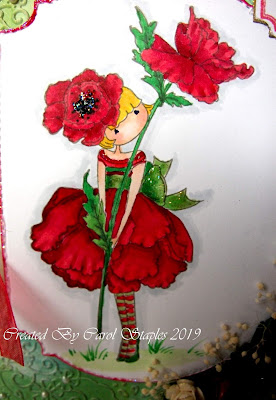 I took these 2 photos of an area in my garden at the
end of May.
I had just dead headed the Cape Daisy, cutting off 154 dead heads!!

Four days later I cut off 241 dead heads!!!
And it is still in full flower and will be, right through the summer.
That is when we get a summer!! 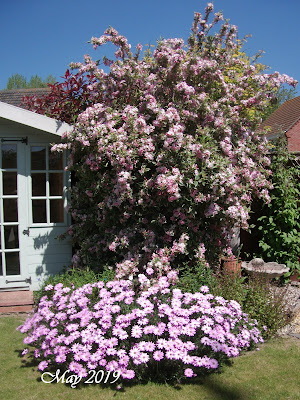 This was another corner and yes that is another Cape Daisy.
I have 3 of them in the border.
They are a but thuggish, but I just cut them back a bit.
The good thing is that they are evergreen, so less weeding to do!! 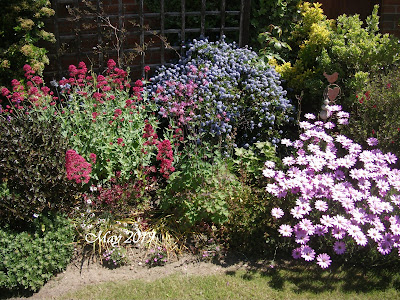 Well I am now off to do a bit more dead heading. I find
it quite relaxing and love watching the bees.

Thanks for taking the time to visit my little blog
and I love to read your lovely messages.
Everyone is appreciated.

Get a cup of coffee or tea, to keep awake!!
A lot of text I am afraid!!

There are a few changes for my crafting life,
starting now!!

One decision was very difficult, which was to step
down from the fabulous Winter Wonderland Design Team.
I had been on the team for 4 1/2 years.
Since my first card appeared on the their blog,
on 2nd January 2015!!
So I thought it was time for a change!
……………………………...

What actually prompted me to step down now, is
that I have joined forces with my friend Lorraine.
I have been tutoring her for around a year.
She has got to the stage now, that she
has reached selling quality. I was happy to join with her
on the selling side. She is very much a perfectionist,
as I also try to be.
Along with the similar sense of humour!!
We always have great fun when we are together,
even though she is rather poorly at the moment.

I have, for around 12 years, sold my cards and craft makes
for Charities, for people that have dementia.
Lorraine's Mother is now in a Nursing Home, after
being cared for at home by her family, for many years.
Her Mother has Alzheimers and needed special care.

My Mother also had Alzheimers many years ago.
My eldest Sister was diagnosed with it too, over a year ago.

I told Lorraine where I sell my cards in Residential and
Nursing Homes, that are Charities.
She took some cards to where her Mother is living
and was surprised how many she sold.

We are now, along with our own outlets, supplying
another outlet together that we approached
and we were accepted straight away.

My Hubby and I did have a short break, 7 days,
spent wandering around The Yorkshire Dales.
We did The Moors last year, so had to do the other side
of the county this year. As last year, the weather was perfect.

Thanks to Marianne, giving us a few areas to visit.
See photos below.

First is not The Dales it's my latest Clay make!!
A swinging Fairy and no moulds for this one.

OOps!! I made her body, hair wings and dress
but forgot to make her any knickers!!! 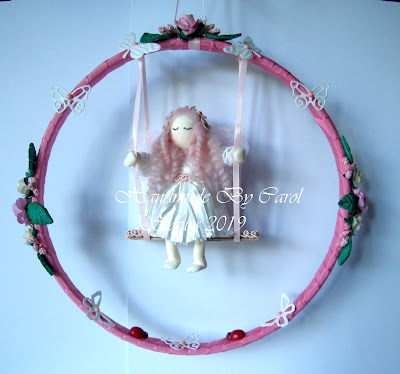 We went on a Canal Narrow Boat.
We were the only people on it!!
It was on The Leeds and Liverpool Canal .

Just one of over a hundred photos!!

Well that's it!! Hope you weren't too bored!!

Thanks for stopping by and leaving your lovely comments.
They are all read and appreciated.
I will always return the compliment to you that do so.

There is a new Winter Wonderland Challenge
starting today, so pop over there to join
in the fun, for a great prize draw.

They also have a DT call out running.