Well that's my holiday over! We had a week in South Devon and a week in the New Forest. The weather could have been a bit warmer but at least it was mostly dry.

We stayed at Seaton in Devon and would highly reccomend ﻿the house where we stayed. It was a 2 minute walk from the beach and definately was worthy of it's 4 star rating. The property is called Carisbrooke and is owned by Zoe and Allistair. It can easily be found if you Google it.

This is a card I made yesterday morning for my friend's birthday, which was yesterday! I know, cutting it a bit fine! But at least I had bought her present on holiday. She collects bears and we bought one from a shop that designed and made them in the actual shop. 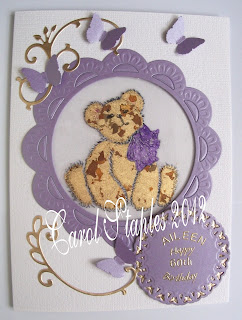 The bear is an old Creative Expressions stamp and is still my favourite bear. I stamped him onto a double sided adhesive sheet﻿. On the back of the sheet, I used a Sakura Star Dust Purple pen to colour his bow, straight onto the adhesive. Then using a craft knife, I cut away sections of the backing paper on his body between the 'fur' lines and applied gold leaf flakes onto the adhesive. I did small sections so as not to get in a mess. 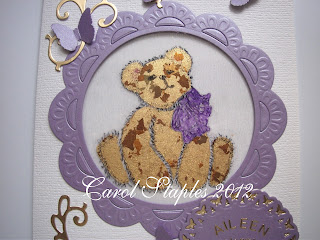 I then stuck him onto acetate. I cut a circle aperture ﻿in the front of my card base and stuck him in the window.
I then cut a frame using a Marianne Creatables die. I wanted the little half moon pieces around the edge of the frame to remain in place. So before I took the card out of the die, I applied tape to the back to hold them in. I then used a circle die to cut out the centre of the frame. As this slighlty flattened the embossing on the frame, I put it back into the Marianne die and embossed it again. 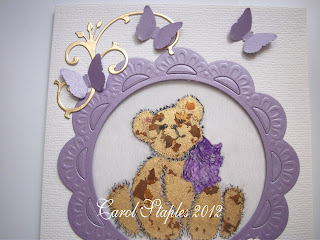 The flourishes are in the same die set as the ﻿frame. The butterflies are a MS punch. For the sentiment I used the Nestie Butterfly circle die.

You might be wondering what the next photo is. I had a problem with my photo programme today and it saved my card pics next to this photo.

This picture was taken a couple of years ago and is my son Nick with Prince William. William spent the day with Nick at the Grassroots Charity that Nick was involved in, through his job with The Football Association.
I made this photo into a card with a speech balloon and my son saying, "No Wills, that is a football. A Rugby ball is this shape!"

I am sure it will be a day he won't forget.

Thanks for stopping by and for leaving your lovely comments. You know I really do enjoy reading them.
Hugs,
Carol S.xx﻿

Just a quick post as I am off on holiday on Saturday. I still have to get plants into pots in the garden and if this rain doesn't stop tomorrow, I will be out there under a brolly in the morning.﻿

I have just read that our area may have the hose pipe ban lifted at the end of the month. That will help a great deal, as I have an area of lawn to turf.

I found these notebooks and calculators that I got some time ago. I also have loads of peel offs that I never know quite what to do with.
The notebooks have metal covers and I stuck a peel off onto the front cover. I also have a reel of sticky back metal. I think it is used by plumbers for ducting systems. I stuck it over the front of the books and used a ball tool to go around the edges of the peel off to sharpen the image through the tape.

Then the fun bit. I used alcohol inks on an applicator and applied it right over the metal tape. 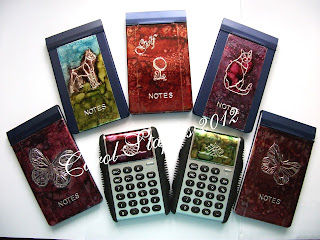 I used an assortment of colour mixes for different effects. On the dog image, top left, I made the dog brown and behind his head, I used Sky Blue for the sky. Pesto made a pretty good grass colour.

I also used some peel offs and metal tape on the top of the calculators screen covers.

I used a Copics blending pen to remove ink from the raised outline of the peel offs. It then made the image appear to be on the top of the tape.

I have done this before on little tins. Nobody could work out how I had done it! Simples!!

Well time for bed as it is now 01.15. My 6 year old Granddaughter told me off yesterday, when I told her what time I go to bed. It was so funny. Lol!

Thank you for visiting my blog and for your lovely comments. I will be back after my holiday.
Hugs,
Carol S.xx

Firstly I must say welcome and thank you to my new followers.﻿ It's always great to get your lovely comments.

Sorry that I haven't posted for a bit but I have been very busy, helping at the charity that I fund raise for. They were putting on an event that happens every year called "The Meal of the Year". It is an event that comes down from head office with rules to follow. The theme for the meal had to come from memories of the residents, of things that they remembered  happening during the reign of the Queen. Racing came up a few times, so a day at Ascot Races was agreed on.

I made the invitations for the guests from head office and the judges. The whole event will be judged and a winner from all the houses will be named.

The idea of a picnic was agreed but they wanted all guests to have their own 'picnic box'. I suggested shoe boxes and we went with them. My husband got most of them, 30 were needed, from a shop near where he works. We had to include the residents in the preparation and we took photos of them decorating their hats. 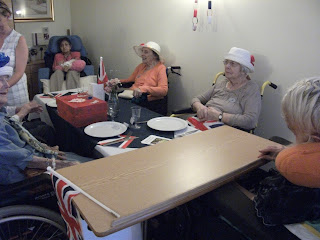 The residents also painted and decorated some of the boxes. 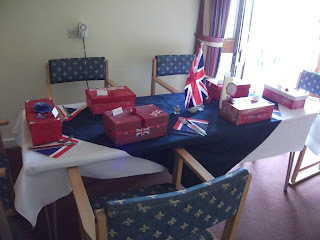 This picture is a roll call of some of the staff. From left to right, Wendy the Admin manager. Jane a carer, as well as the lady to her left. The lady in the navy dress and red belt is Rita. She is the Manager of the home and to her left is Karen, who also does admin. 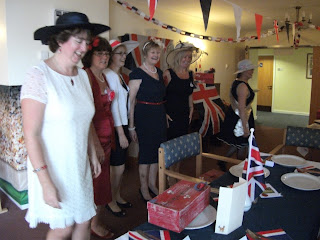 This is one of the 'posh' boxes I made for the judges from head office. Still just a boot box, I made 3 red and 2 blue. I embossed card in my Joy die cutting machine﻿, for the body of the box and topped with Grand Nesties Label 4 for the centre piece. Made the paper roses from punched papers. 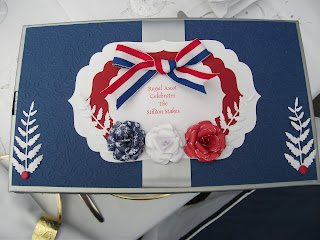 I did a couple of small table centres and I did this arrangement for 'The Royal Enclosure'! It was so hot I was worried that the flowers wouldn't last. 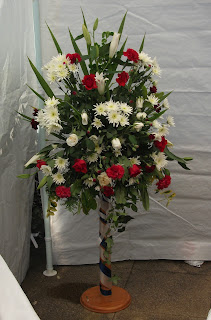 This amazing cake was made by Rita, the home manager. It was a stunning centrepiece. 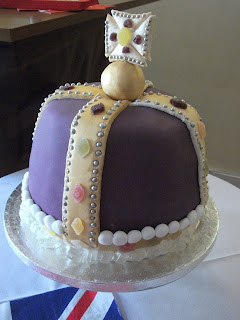 The Royal couple sat in the corner of the Royal Enclosure but didn't want anything to eat!! Even though it was really hot last Tuesday, they had to have a rug over them as they were legless! Spot the corgi next to the queen. Wendy had a hand in the making of these. She also made lifsize soldiers with William and Harry faces. I did help a bit with those. 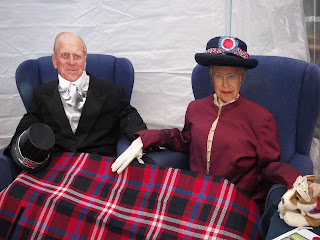 I have loads more pictures but I didn't want to overload my post. The day was amazing, with races for everyone to bet real money on. Even a real horse came complete with jockey.

We now just have to wait to see where we came in the competition., as all the other houses have to have their day judged.

I hope you all enjoy the holiday weekend and I will post again in the week as I am on holiday next weekend. Yippee!!