Hi everyone, Hope you had a great weekend. I managed to get out some plants out in the garden and into some pots. My knee is a bit sore today but not too bad. Was worth a little pain to get the job done!
These are some ﻿pictures of my makes, for the event we had at the charity I fund raise for.
It is called 'The Meal Of The Year' and is a competition between all of the care homes in the Charity, Brendoncare. The house I support is Stildon and is just across a main road from where I live now. I have been doing this for over 10 years for them. The money I raise, goes towards the residents entertainment.
The chef at the home, Jason, has to put on a special meal, with the budget head office gives him. The whole day has a theme that HO also gives us. This year it was a red carpet party, supposed to be after an 'awards giving' ceremony, for heroes.
I forgot to take a photo of the invitations I made, as they were made quickly, as they had to get them in the post. They were similar to the menu below.
For the invites, I stamped the Indigo Anemone onto a piece of white card, using Flitter Glu and Silver Mix Mega Flakes and then cut it out. I coloured it with Copics pens. I then attached it to the card blank, in the same position as on the picture below. I only stuck it down on the straight edges and a few foam pads on the central area, leaving a space for a tag to slide under. I stamped the word 'Invitation' again using Indigo Blue Flitter Glu and Flakes, onto a tag shaped card and slid it into the pocket.
The header was Stildon's Heroes, which was the name of the dinner. The theme colours were red, white and blue. 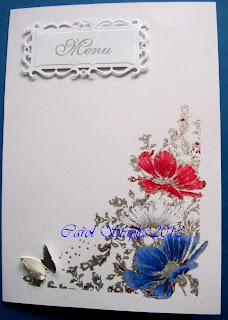 The Manager, Shirley, had  to find among the residents, people that had done something that special. They would then be the 'Heroes', for the day.
It was Shirley's first Meal Of The Year, as she has only been at the home for a few months. I must say she handled it amazingly. It all went very well on the day, Monday last week, was the day. 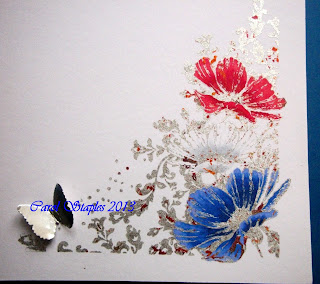 These are a few of the 33 boxes I made. Each had 3 hand made flowers on! 99 flowers I made. I didn't think that one out well! Never mind, they were done in time, with a couple of nights, getting into bed just after 2am! Also medals for the 'Heroes'. 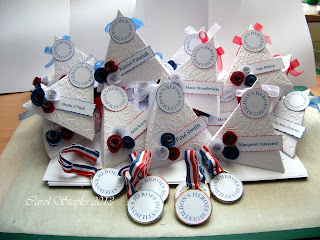 On the Sunday before the event, I spent the morning doing 7 table arrangements at home. I then went up to the home, where we were all meeting to get the last minute things done.
I spent the first hour, wrapping the truffles that the residents had made. I then put one in each box and tied them with ribbon. The residents have to get involved where possible, is some of the arrangements for the day. 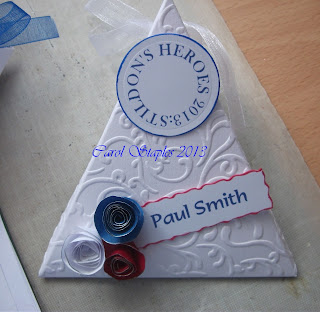 Each home will get awarded points, ﻿for various aspects of the day. As it is a competition between the homes, we have to wait until July, before we know where we come in the list of entrants.
We are not particularly worried about position, as everybody said they really enjoyed the day. That is the most important thing to us.
As I have 2 markets in 2 weeks time, I am now busy making stock. As they are 2 days running, I don't have time to make anything in between.
Well back to work!
Thanks for stopping by and hope you like what you see. I love your comments and like looking at other blogs. So if you leave me a comment, I will return the same to you.
Hugs,
Carol S.xx

Goodness!! What a lot of work this must've been - All for a fantastic cause though. Jx