I have had a rubbish week and glad this week is coming to an end!!
It started off ok but deteriorated as the week went on .

On Wednesday morning we popped out to the shops and on return,
we noticed that the boiler had a blue flashing light on it.
We turned the heating on but nothing worked.

Cut a long story short, or you might fall asleep!!
Two plumbers looked at it but it was too technical for them to do.
Yesterday morning, plumber number 3 told us it was the fan not working.

On his advice, we then got onto Bosch.
They managed to book us in on a cancellation for that day.
Thank goodness, as we only had to get through one cold night
with no heating!
A man came yesterday late morning....job done!!

Also on Wednesday, we were having the Summerhouse roof re-felted.
Should have taken an hour to do BUT!!!!
One side of the roof was fine. The other side, the wood was found to be
rotten on both corners.
When Rich lifted the piece of wood he had a bit of a surprise!
He found a mouse in it's nest along with a dead one!
The live one ran off. (well the dead one couldn't!!)

It ended up taking a lot longer than planned so cost extra! A lot!

Yesterday afternoon I had an appointment with Consultant.
He was very nice but I now have to go for another procedure
in a few weeks. Not looking forward to that one!

He then sent me off to have blood test.
It took 2 goes with the needle to get any out of me!!
Then it was too late to go to a Garden Centre we
had planned to go to.

Well if you are still with me and not bored or asleep,
this little Owl is made from MDF.
I bought a couple of them last year at Ally Pally but wasn't
sure how to decorate them.
So I had a play and this is the result.

The paper I used was free with a magazine.
The eyes I made with a strip of pearlised card, scored and folded
then made into a circle.
Topped of with google eyes and a ribbon bow below. 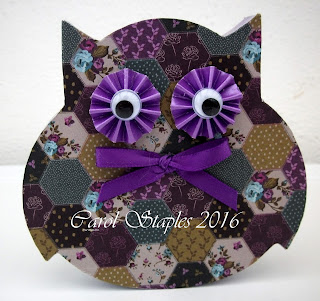 I am struggling to keep my eyes open, so off to bed.

Thank you for popping in and I hope you will leave me a message,
to let me know you've been.
Big hugs,
Carolxxxx

This is my first card entry as a new member for Crafty Ribbons DT.

Our Host from The Buttons Team for this challenge is
Kelly.

The theme is
Flowers - as the main focal point.

Please do not forget to add Ribbon to your card, to qualify your entry.
I used Sheer Puff Spot

I used a precoloured image from the paper pads from Lili of the Valley.
Sadly they are no longer available. 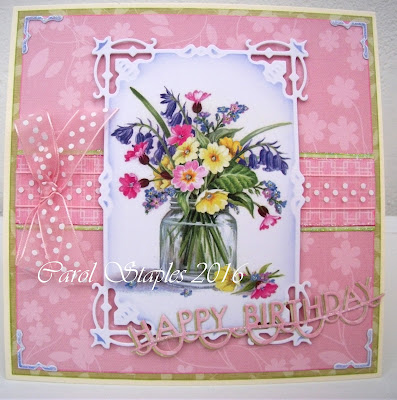 The prize and inspiration, from the very talented Button Teamies
you will find on the
Crafty Ribbons Challenge Here.

Looking forward to seeing your entries and visiting
some of your blogs.

Well this will get you thinking!!
Non-traditional colours for your Christmas card,
is your entrance ticket into the
Winter Wonderland Challenge this week.

I had a problem deciding what colour to go for.
I had purple, pink, beige or this brown mix.
All of them looked ok but I decided on the vintage look.
So browns was the winner.

This image was from a Debbi Moore Inspiration book.

I cut out extra snowflakes and inked the edges of them
and also edged the torn edges of the image.

The snowflakes I attached with foam pads. 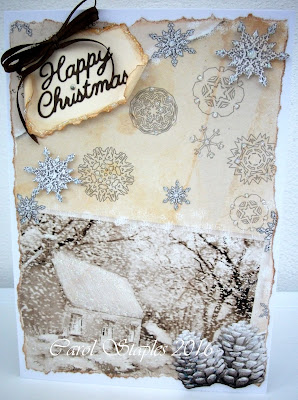 I cut out extra pine cones and raised them up with foam pads.

I then added lots of Stickles to the image.
Hoping you can see it on the roof  and the cones. 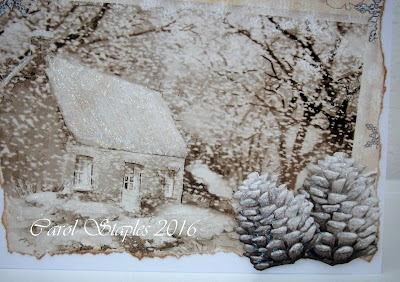 Our generous sponsor is
Crafts And Me

The Prize is £8 Voucher

Looking forward to seeing your entries.

Thanks for visiting and leaving your lovely messages.
I really do love reading them.

I am so honored and hope I can keep up with the amazing
members of the teams.

Well I am now going to make my first DT card
for the next challenge.

Have A Kickin' Great Birthday

Loving the new stamps from Lili Of The Valley.
This is Oliver and a very useful addition to my stash. I don't have many
suitable stamps for this age group.

Coloured him with Distress Inks 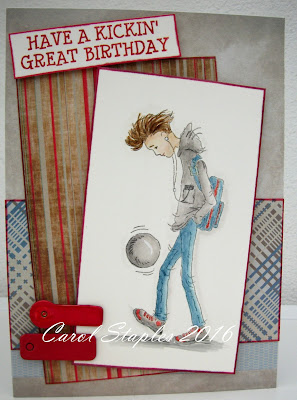 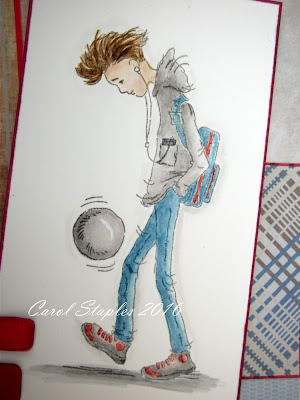 Well a very short post as I am soooo tired.
I keep waking at 5am and unable to get back to sleep.
As I work in my craft room until 1 or 2am, I am not getting enough sleep.

Went to the hospital today for my Ultrasound.
I am delighted to say that the lumps they saw on my scan on my liver,
are benign cysts and nothing nasty. They don't do anything about them.
Yippee. I can hopefully get on with my life again.

I am entering this card into LOTV Challenge, on their Facebook page.
Please check it out as it finishes at the weekend.

Right I am being good tonight, as it's nearly quarter past midnight, I am going to bed.

Email ThisBlogThis!Share to TwitterShare to FacebookShare to Pinterest
Labels: Distress Inks, Lili Of The Valley

This was my stall last Tuesday.
I have now decided that I ought to have 2 tables!!

The sign on the left of the first photo is the stall next to me!
Her name is Coral!! She is lovely and last month
I bought an unused heat gun from her.
Everybody at this fair are so friendly.
We always have a good laugh too.

The morning was very busy. For the first hour
there was a constant stream of people at my stall.
Most of them bought something which was amazing.

The 'Home' sign on the top shelf in the centre sold.
The Treble Cleff - the black item underneath the Teal colour
large butterfly hanging on the left of the stand,  sold.
A big wedding card on the left, I had blogged it,
sold and is going to Norway. 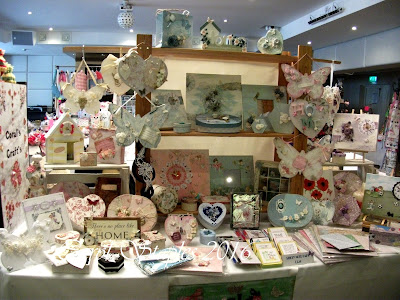 In the picture below, the big heart under the pink butterfly sold.
To the right of the top pink butterfly, you can just see my
fairy hangers, I sold one of them.

Six small boxes, sold. The small teal heart in front of my Poppy clock, sold.
To the right of the small heart, a purple hexagonal box, sold.
A few note pads, paper packs and loads of cards, sold. 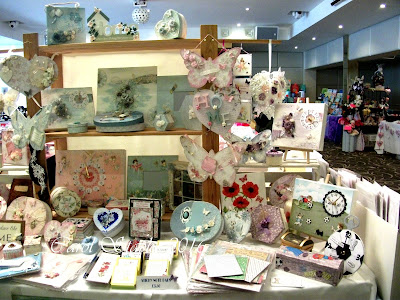 I also had an order for two keepsake boxes for a wedding. 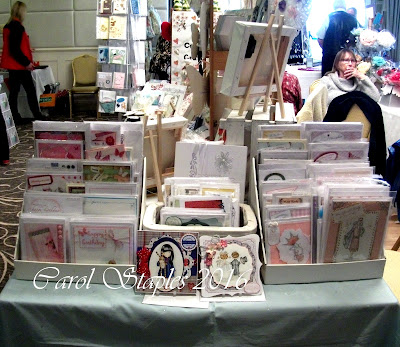 It was the best sales day I have had up here in Suffolk.
In fact is was amazing.

I am doing another fair in Potter Heigham, Norfolk on Sunday.

Great news for my charity!

Today there is a new challenge at Winter Wonderland.
Our hostess with the mostest this week is the brilliant

Eileen has chosen this weeks theme as
Anything But A Card

I have chosen to do a box that I make, to go on my dinner
table at Christmas. I put Bailey's Truffles in them.

They are very quick to make, as there is no gluing,
other than sticking on the embellishments. 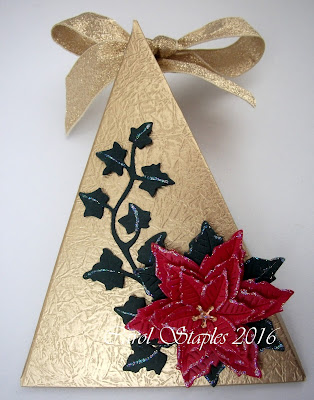 A quick and simple box and you can make it any size you like.
Also great as wedding favour boxes. 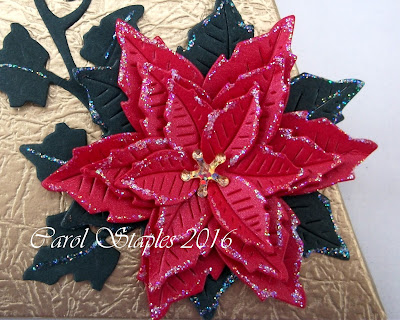 Our first Sponsor this week is
Di's Digi Stamps. 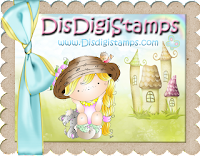 The prize they are very generously giving a
$12 Voucher

Our second Sponsor this week is
Marianne Designs.
They are giving the an amazing surprise

Please remember your makes must be Christmas only,
or they will not be entered into the draw.

I am looking forward to seeing your lovely makes.
Don't forget to pop over to the Winter Wonderland
blog, to see the Snowflakes teamies stunning designs.

Thanks for popping in and leaving you lovely messages.
Big hugs,
Carolxxxx