Firstly, I must thank all of you that have left comments on my last posting. I have never had so many comments on one posting. So thank you all very much. I now just have to beg for more followers!! If I get 50 by Christmas, I will find some candy to post.
I am absolutely shattered today and even my husband is too. Fortunately he had booked today off work. The reason is﻿, because we did a Craft Fair both Saturday and Sunday, in Knockholt in Kent.  About a 40 minute drive from home. It is in a marque in a Garden Centre, that people to go to for their famous restaurant.
On Saturday we had over one thousand people through!!! (clicker counted at the door) and I think they said around 700 on Sunday, but will get confirmation on that. To say it was busy was an understatement. It didn't even ease off at lunch time, when most markets do, but it was an amazing atmosphere. We really enjoyed the weekend. And of course we sold loads of things. I ended up with 4 empty crates!
This is an easel card I made last week, with one of the stamps I bought from the Lili of The Valley stand at Ally Pally.  She is called Snow Queen and is beautiful. I used Distress Inks to colour her. The backing paper is from a Joy Crafts paper pad called Winter Paper Bloc.

The die I used is Go Create, Large Frilly Die set 10. I bumped into Paul from Go Create at Ally Pally. When he first started doing his dies, a few years ago, he used to come to The Craft Barn where I was a Tutor and Demonstrator. He would have a stand at our Extravaganza days and do demos along with us. He is really funny and we always had a good laugh. It was nice to catch up. 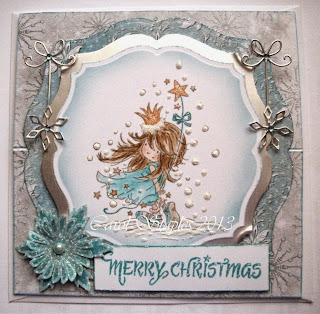 The snow flakes are a Memory Box  die and the flower is a Spellbinders Aster flower die. The sentiment is an old one. Can't remember from where it came! 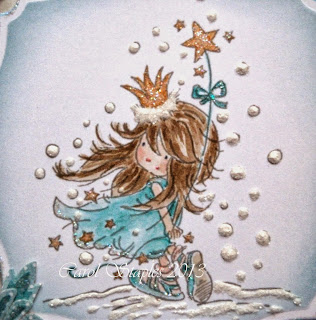 For the snow I used Americana Writer glue, with Cosmic Shimmer Glitter Jewels, Diamond Sprinkles on top. I sold the card on Saturday!
If you wonder why I haven't posted very often, read on and you may understand why!!
Now I don't want to bore you but I managed to take a few pictures of my stall, just after 1 o'clock! It opened at 10am and we were too busy to take any pictures until then. So I had already sold loads of things before these were taken.
After these pics were taken, in this picture I had sold the seed books, the large oval teal box, the football note books, 5 small notebooks, 9 Post-it pads, (just to the left of the pink clock)  2 heart books (behind the football books) and the pink chest right at the front. 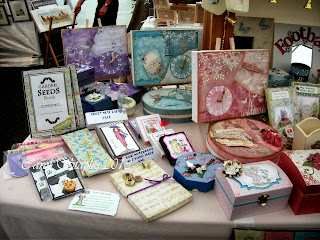 In the pic below I sold, the dark pink daisy box, the boxed card, the gardening books (standing up to the right of the pink clock) plus 2 from my spares box. The poppy clock ( I had already sold one Poppy clock) this one was my spare and the same lady bought the Poppy mirror and 2 Poppy candles. She couldn't decide what to have, so bought them all! 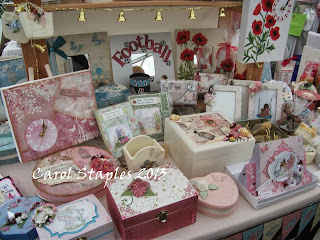 On the top shelf the white flower pot went. On the shelf below, the small Teal wooden box at the front. I had already sold a pink bag/box, similar to the one in the back right corner. Also 7 of the little round baskets on the top shelf. 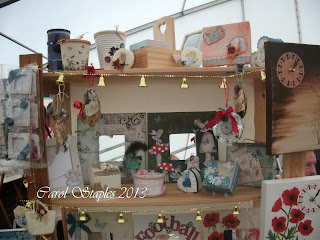 In the picture below, most of the Christmas gift boxes have gone. Along with the bath bombs right at the front (the blur of cellophane!) Also a gold cracker gift box. 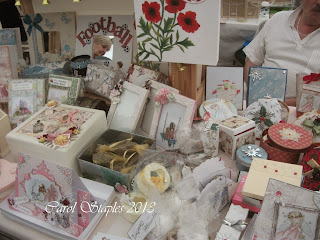 In the next pic, the box of cheap cards, most have gone! Along with the boxed card (LOTV angel stamp) at the front. Also the little James and Snowman (LOTV stamp) box went. The top image was tied with ribbon to another circle underneath. The one below was stamped with a LOTV fairy  and coloured with DI. It meant that the box could then be used as a trinket box. 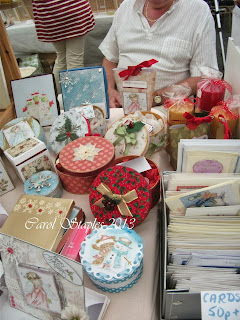 My cards racks were bursting with cards when I started the day. They are now nearly empty! 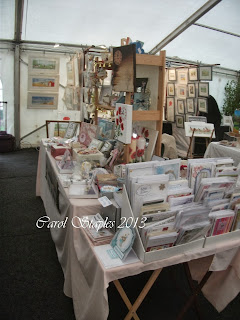 Fortunately I have 2 weeks before my next Craft Fair and then the following weekend again. The second one is always busy too!
I think I am going to have a few late nights for the next few weeks. I am not complaining, as I love the excuse to sit and craft! Also the more I sell, the more money for my charity!
Sadly, I now have to do the ironing and not crafting!
Thank you for stopping by and for all your lovely comments.
Hugs,
Carol S.xx
Posted by Carol S. at 15:05

Wow Carol your stall looked great. Glad you had a good weekend.
You are going to be busy restocking!!
Carole x

Gorgeus card, must ink her again. Love the shape and the colours. Your stall looks fabulous and well done on selling so much.

Wow - your stall looks amazing. Where did you ever find the time to make all that lovely stuff? I am glad your weekend was such a success :o)

Wow Carol your craft stall looked amazing! I'm not surprised you sold so much it looks so pretty! Just the sort of stall I would love to see full of pretty things!
Hugs Lynsey x

Such a beautiful card Carol..love the image and colouring..gorgeous, and love the silver stars and fluffy snow..so pretty.
Your stall looks wonderful,so many beautiful crafty projects..

A gorgeous card Carol. I love the colours and perfect embellies.

It looks like you were an enormous success at the craft fair! Your stall looked so pretty with a fabulous and colourful display.
It must be very satisfying to see so many of your handmade creations being appreciated by others.

Wow what a fab display at your Craft Fair... no wonder you sold so much, your creations are fabulous! Love the LOTV card, so sweet! xx

Your stand looks fab carol, I'm so pleased it was a success - no wonder you are shattered (and what a lovely husband you have to help out!)
Have a lovely weekend
Anne x

Well done you on your stall - it looked incredible!!! Jxx