What a week! And it's only half way through!
Friday evening, I broke a filling in a tooth. I was eating a quiche salad!!
Monday, the boiler decided not to work, so we only had cold water. Hubby had to get in the loft, to see if he could get it to work. ﻿After pressing a few buttons it worked. That was, until after he had his shower on Tuesday morning. No hot water again. So he had to get in loft again, so I could have a hot shower. Really couldn't face a cold one!:) So I phoned our plumber man and he was going to come in the afternoon.
At 7.45 that morning, I had a text from my son, telling me that their baby, (1st one), had arrived at 03.30 that morning! Callum, who weighed in at 8lb1oz. Mum, Dad and baby all fine.
I phoned the dentist and he is on holiday. Fortunately they fitted me in with another one, at 2.30pm, that afternoon. My granddaughter came at 08.30 that day too, as half term. Had to drop her off at her Nannie's at 2pm, as my daughter didn't finish work until 2.30.
Oh!! Nearly forgot! Another baby arrived at 11.30, my eBosser machine!! Only ordered it on Friday morning!
Granddaughter had brought her homework for us to do! They are studying Egypt at school and we had to make some jars that went in the tombs. So I spent the morning making a paper mache pot. Yuk!
After the boiler repair man had gone at 5.30pm, I was absolutely knackered!!
I made this card last week for stock. In fact I had such fun making it, I made 3, using different cars. I hate to think how old this stamp is. Don't even know where I got it. It is a clear stamp. 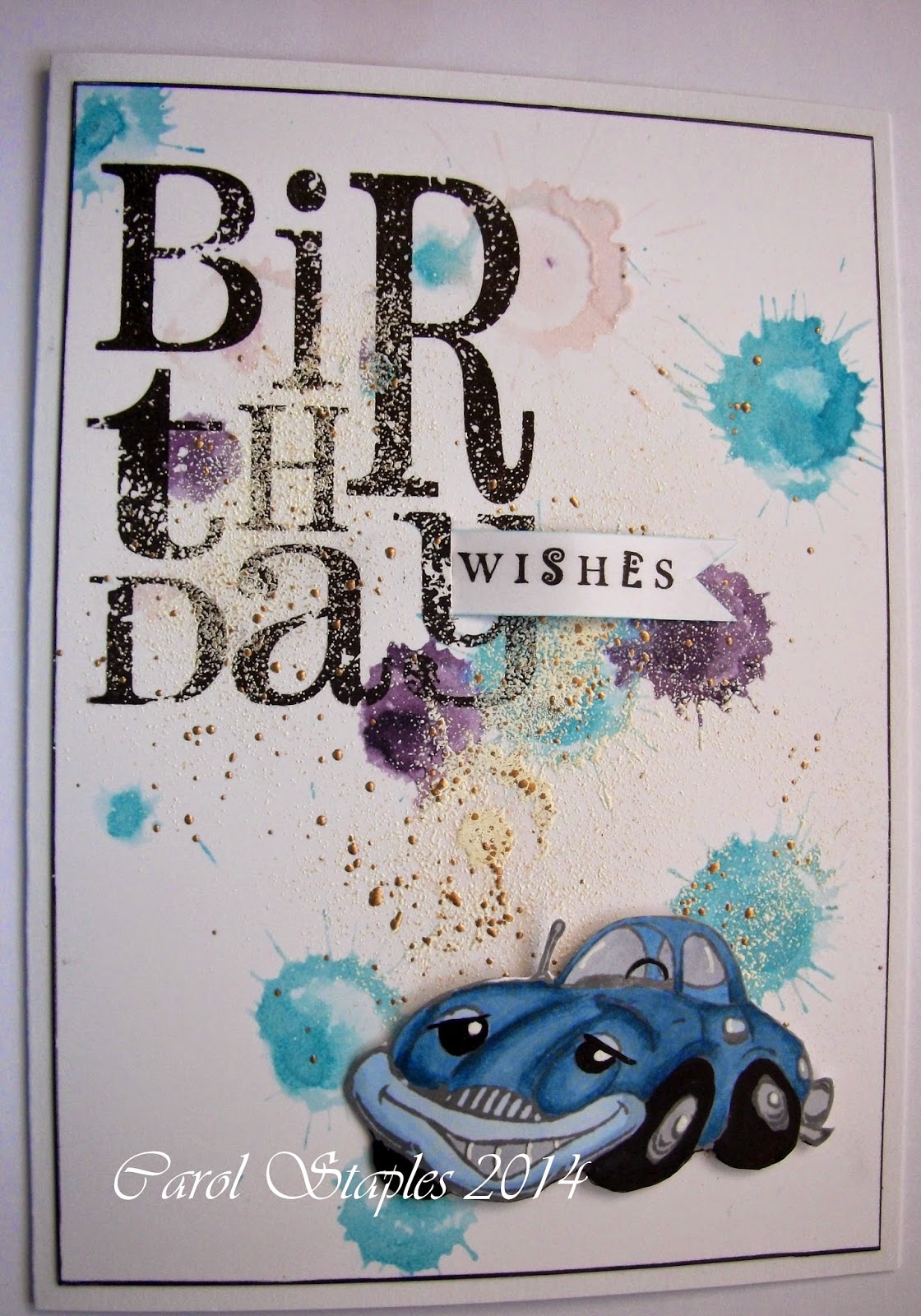 For the background, I used Distress Stains I bought at Ally Pally. It was great fun, just thumping them down on the card to get the 'splat' effect.
I stamped the big LOTV sentiment, using black Versafine ink. I then threw on some Ivory Frantage on for a bit of texture. The 'wishes' stamp again is an old one.
﻿ 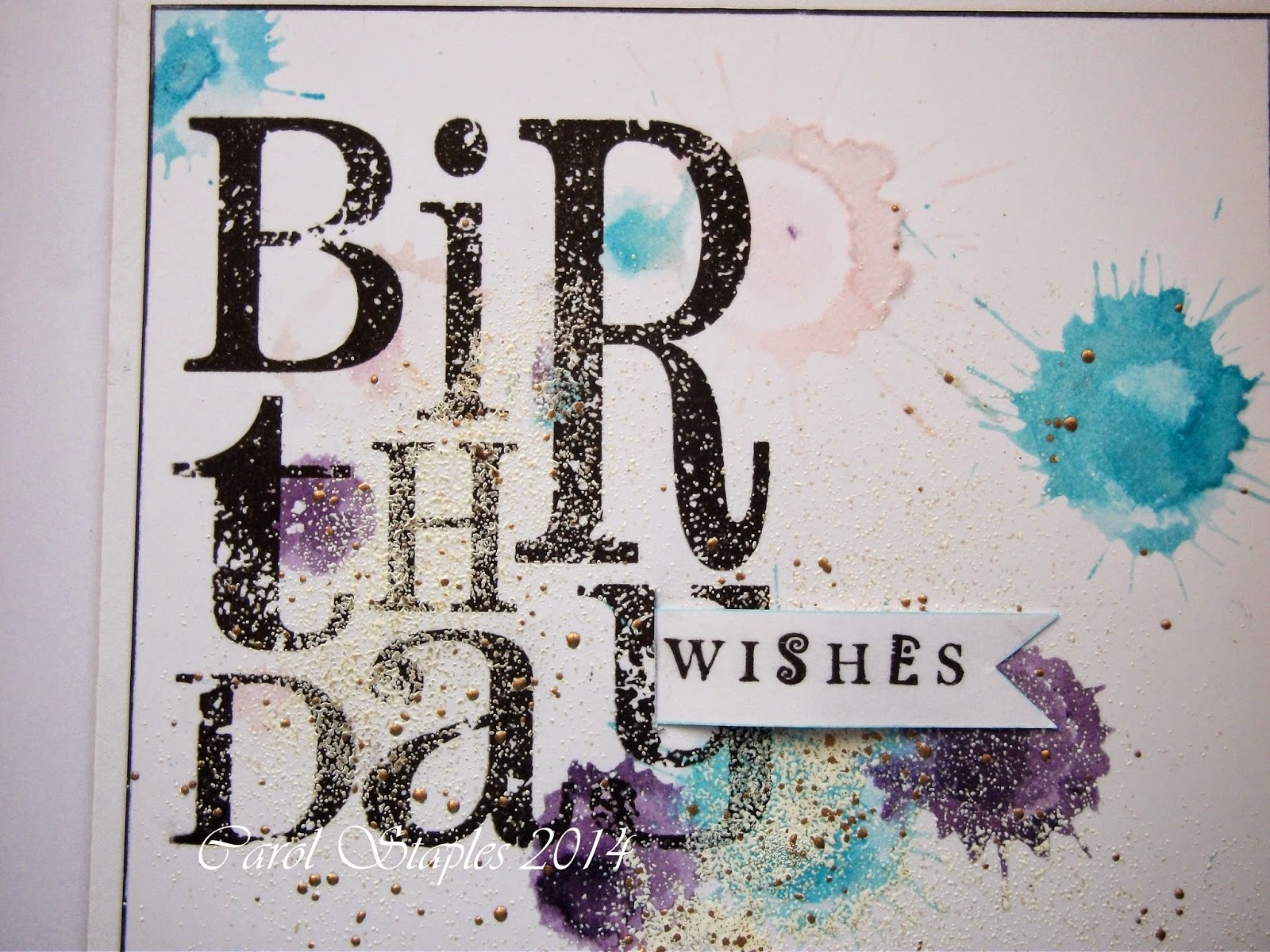 I coloured the car using Copics for a change. 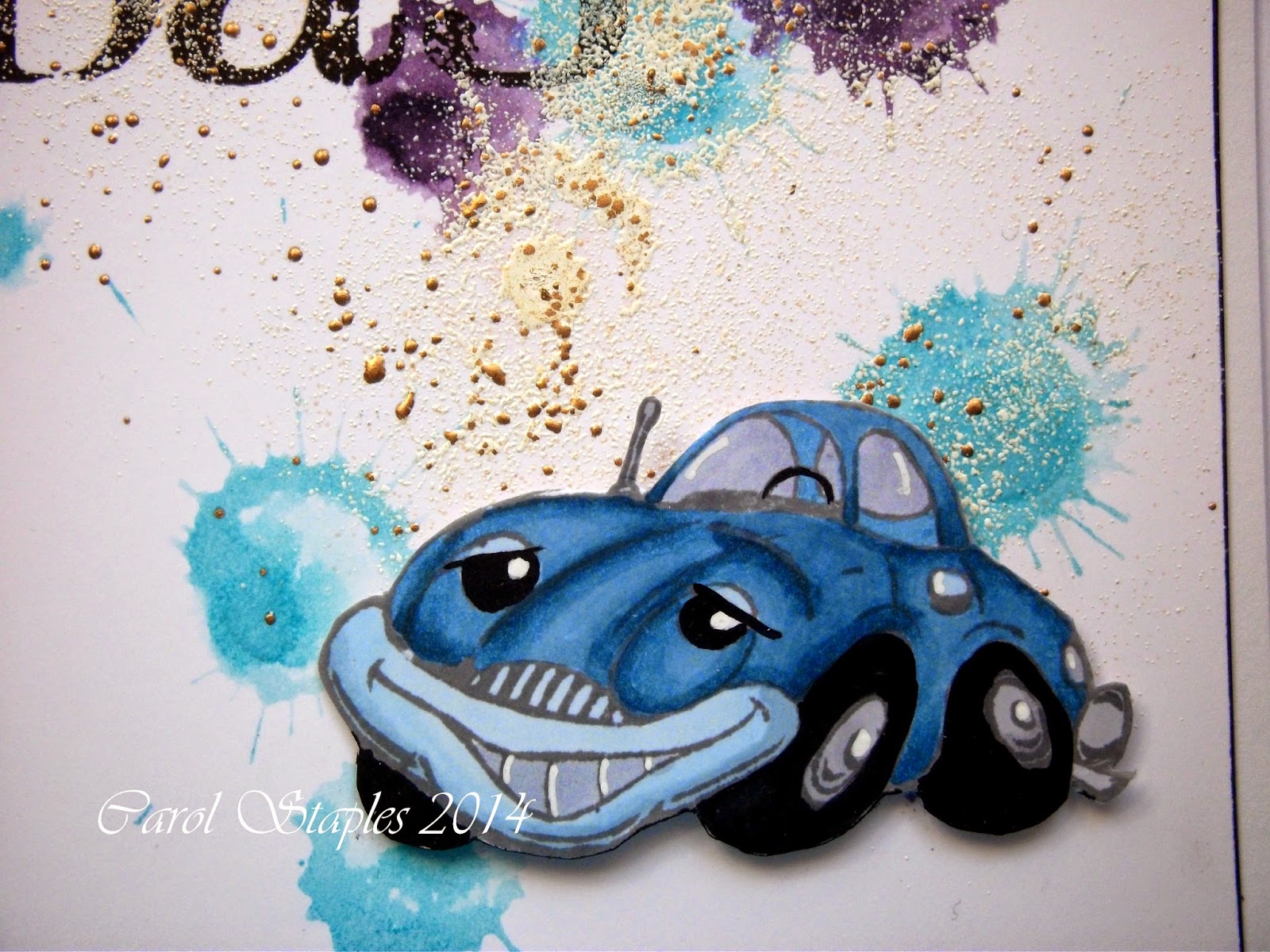 Just for a change, I am not off to bed, as it's only 6.30pm! Husband should be home shortly, so have to think about cooking dinner.
Thanks for taking time out of your day to visit my blog. I love getting comments, as they encourage me to keep it going.
Hugs,
Carol S.xx
Posted by Carol S. at 18:43

Email ThisBlogThis!Share to TwitterShare to FacebookShare to Pinterest
Labels: Copics/Alcohol pens card, Lili Of The Valley

Oh what a week you have had! Congratulations on the new babies, which will you play with the most? !! Your card is fabulous.... love the splats!
Do you know the Inn on the Pond at Nutfield? We went for tea but it was closed (too early)....it would have been nice overlooking the marsh xx.

Oh Carol what a week but huge congrats on the new baby. Fab fun card, love the splats and fun car with that big sentiment.

A broken filling? Yikes! Totally not something that goes well with a meal. At least that's been dealt with through what I presume is a spot-on dental work. Good going that you've been able to proceed with great art with awesome bunch of materials. Good day!

What do you think of the e bosser,, good for embossing but I don't like using my dies on it, good to hear what you think.xx

What a week, congratulations on the new baby! Love your card, the background looks so effective and the colours are beautiful.
Rebecca.

Oh my GOSH Carol! Wowwww, that is a WEEK! You had a LOT going on! Sheeeesh! But a huge CONGRATULATIONS on your newest Grandbaby!!!!!! Wooohooo! As for your card .. I love it! Very clever and way cool colors too! OoOh and I love the shimmery effect of the gold splatter!

ps .. hope you have a FABULOUS upcoming week! hehe!

Blimey Carol, I'm going backwards through your posts so your fall came on top of this hectic week! You must be exhausted. Love this card, great way to use the sentiment and also the distress stains which I bought and never quite knew what to do with!
Hope things have calmed down a bit!
Anne xx