Sorry I haven't posted for a bit but I have had a few problems going on over the last couple of weeks. The final straw happened when I was in my craft room working and I heard a very loud bang and then the tinkling sound of breaking glass. I ran into the sitting room, to find my great big mirror I had hanging over the fireplace, in the middle of the floor smashed to pieces! The glass had shot all over the room.

I had a beautiful ornamental cat my daughter had bought me many years ago, which was sitting on the mantelpiece. It had a very long tail which curled up at the end. The tail had been snapped off half way up. Also a small chip was out of his ear. Another smaller cat that was alongside him, he was in a pose with his front legs stretched out. He had a toe missing. A wooden goblet that I had turned on a lathe was under the mirror, thankfully not damaged. A big plant I had in the fireplace, had the porcelain pot it was standing in broken. I had just watered the plant, so water was pouring out the bottom. I didn't know where to start first. Decided to mop up the water first and then got a dustpan and brush and started clearing up the glass. It took a couple of hours and I was really fed up!

I repaired the cat's broken tail and smoothed out the chip in his ear and coloured it with Distress Ink! Later that night, I was turning out the light on a side table where I sit and saw something on my book, which was on the table. It was the smaller cat's toe!! It was perfect, so I just stuck it back on and it doesn't even show the join!

Finally found time to post﻿ a card I made for my friend Sue. She has a couple of cats and one is called Mia, the same as my Grand-daughter. She also has loads of chickens running around her place, which is amazing, with a 2 1/2 acre lake in the middle.

I used a Joanna Sheen stamp and coloured the image with distress inks. She is a multi coloured cat, not quite as bright as my picture. Sue is coming with me to do a craft market on Saturday. 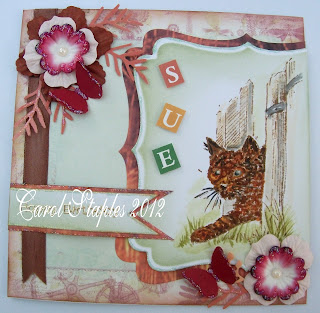 The flowers are just from my stash and the butterflies were punched from some scraps I had. 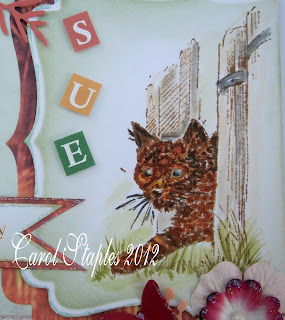 Thank you for stopping by and I just love to read your lovely comments.
Hugs,
Carol S.xx
Posted by Carol S. at 01:12

Wow how fabulous Carol and what a super cat image . Ref your question -I use copic to colour with and sometimes Promarkers and flexi markers I am fortunate to have been given sets as gifts. Big Hugs Elaine