A neighbour asked if I would make a card for
their friends' Diamond Wedding Anniversary.

So this what I came up with.
The glitter card I used was from Hobbycraft,
as were some of the flowers.

The background is a pearlescent card I bought at
Thetford Craft Show. I used a Craft Too A4
Embossing folder on it. 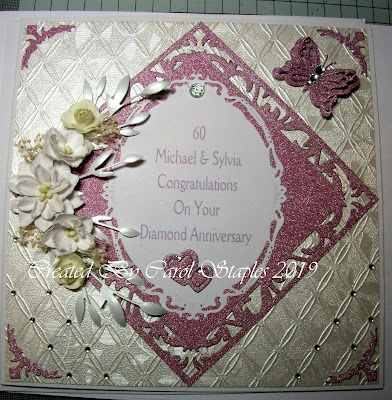 This is the insert paper from my stash and
the sentiment I printed on my computer.
The wording was given to me from
my neighbour. 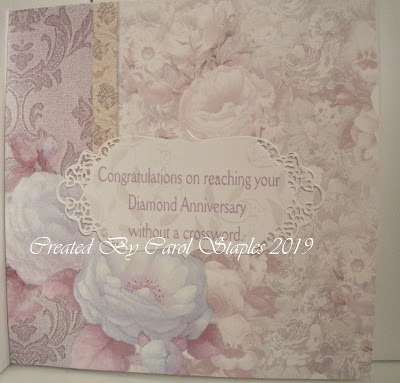 She thought it was far above what she thought
it would be! It was the first card I have made for her.
She hasn't seen my cards other than their
Christmas card I gave them last year!

Thank you for all your lovely messages you left
me on my last post.
My swirly patterend bauble is much better than
the one on my last post!!
It was a fiddle to make initially but got the hang of it now.

I was hoping it would take less fabric but it
still took 92 x 2 inch squares!!

In between my Christmas makes to sell, I have just
finished doing a Cross stitch Advent Calendar
for my Grandson. I now have to get my
sewing machine out and put all the pieces together!!

Big question here Carol...do you ever sleep? you are SO busy! What a stunning card for the Diamond Anniversary..a lot of hard work in that one. Hope we get a peek at the advent calendar too. Hugs xx

This is really pretty. I bet your neighbour was really chuffed with it. I love the colour combination. Hugs ValeryAnne.

I might have a go at swirly baubles as it does look pretty. I made another out of paper on Monday and it looked much better than last week’s. It’s all trial and error. Your card is very pretty, no wonder she loved it

Brilliant and the colours are stunning.x

A beautiful card Carol. A cross stitch calendar as well as everything else, you must be like a whirlwind doing all these different crafts :) x

What a beautiful detailed card .. .. I'm not surprised your neighbour was impressed. I bet she will be knocking on your door for more cards in the future!

Just had a look at the bauble on your previous post. That is totally amazing. I love that you post so many different crafts!

Hope all is well with you. It sounds like you are going to be super busy with your fayre work!

Oh this is gorgeous Carol, such a lovely design.
Lorraine

OH you did a wonderful job on the diamond anniversary! This is gorgeous! Such a sweet thing to make a handmade card for the occasion and personalized, too! Lovely! Big hugs! xx

A gorgeous card Carol, such a beautiful design.
It sounds like you are rather busy, I look forward to seeing your advent calendar.
Pauline - Crafting with Cotnob
x

This is beautiful, I’m not surprised your neighbour was delighted with it Carol. I love the idea of using the diamond and a box is a lovely finishing touch
Anne x